Let’s review the hard facts about the mysterious disappearance of Flight # 370.

Following is a chronological series of the peradventure scenario of the mysterious disappearance Flight # 370.   I’ve based this list on best information I could decipher from the farrago of conflicting explanations scattered thought-out the media.

What happened to Flight 370?
We do not know.  Nonetheless, let’s review some of the theories. The following list is based on the data that I’ve gleaned from all manner of pundits on radio, television, and in print who spew endless speculations that range from “maybe” to “outlandish.”   These purveyors maybe learned or ignorant about the basics of aviation physics, airline operations, or have access to secret intelligence.  And, the data is changed frequently.  Accordingly, we must adopt a “wait and see” belief.  The first list has some credulity.

Here are a few cockamamie scenarios that stretch credulity that I’ve seen on television or heard on radio.

The Search.  At first, authorities scoured the South China Sea (east of Malaysia).  After confirmation that Flight # 370 changed to a westerly course, they moved the search to the Gulf of Thailand, Bay of Bengal, and then to the southern Indian Ocean.  Twenty six nations are involved in the search: including, Malaysia, the USA, Australia, New Zealand, Singapore, China, Indonesia, Thailand, Vietnam, and the Philippines, for examples.

Searchers are using a host of advanced technology, including satellite imagery, to locate the “black box,” aircraft debris, or the aircraft itself.  Oceanographic and metrological data are integrated into the aircraft-location equations. Several days ago, I saw on television a US Naval public-affairs officer admit that the Navy is using classified techniques and equipment in their search.

To demonstrate the extremes the television pundits will employ to fill airtime and to garner ratings, two days ago I saw a prominent television personality asking a female psychic for a paranormal explanation of the missing 777.  Mostly, she babbled puerile gobbledygook for about four minutes. However, she made two points of interest: the 777 landed safely in Pakistan and the passengers are dead.

Taking no chances, the Israeli Air Force is on high alert.  (A highjacking for nefarious schemes.)

Next week, I reckon we’ll have more information.  If so, I’ll continue this evolving episode and will explore other airliner’s mysterious disappearances.

Retired Naval Captain, S. Martin Shelton, has tracked the disappearance of Amelia Earhart’s flight and written a  story based upon the facts of the flight and aviator. 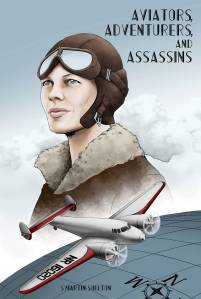