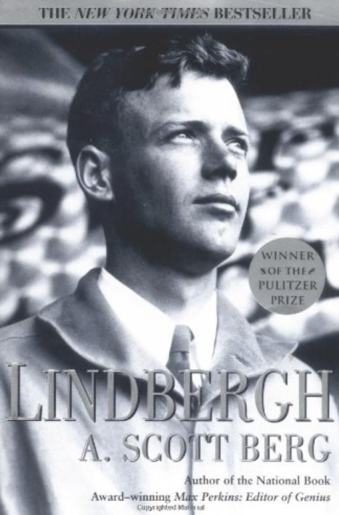 Berg presents a comprehensive biography of Charles A. Lindbergh, the famous hero and the infamous blackguard. The pioneer aviator, world traveler, political activist, intrepid warrior, zealous environmentalist, and international celebrity. Accordingly, this tome is heavy in weight and content.

Berg’s writing style is refined and empathetic. In this meticulously detailed litany of Lindbergh’s accomplishments and foibles, we learn more about Charles Lindbergh than most of us need or want to know. Nonetheless, the author reveals the key points in this aviator’s life in engaging fashion.  I’ll not repeat all of them in this review. However, following are some that I found particularly interesting:

Of singular import were his visits to the Third Reich in the late 1930s, and his proclaimed admiration for Germany’s advanced military aircraft. At a dinner party on October 18, 1938 at the American Embassy in Berlin, the Nazi Air Minister, Field Marshal Hermann Göring, presented Lindbergh with the Verdienstkreuz der Deutschen Adler or “Service Cross of the Order of the German Eagle.” This swank medal was a Maltese cross surrounded by eagles and miniature swastikas. High-ranking German officials awarded this medal to foreigners who were considered sympathetic to the Third Reich.

Aside: In 1938 the Spanish Civil War raged—the Communist government v. General Francisco Franco and his fascist army. The Third Reich sent its Condor Legion, top of the line aircraft and experienced aviators, to support General Franco.

The Nazi medal would be Lindbergh’s shameful scarlet cross for the remainder of his life.

On his return to the USA, Lindbergh became an avid leader of and vocal advocate for the America First policy: no involvement in foreign wars, and Great Britain must stand alone against the Wehrmacht; if Britain should fall, so be it. Some of his rhetoric was tinged with anti-Semitic innuendos.

Now Lindbergh, the former hero of the world, became a pariah. He surrendered his colonel rank in the Army reserves and alienated President Roosevelt, all manner of politicians, the public, and some of his friends. Nonetheless, he continued his nonintervention policy until 7 December 1941—“a date which will live in infamy,” as President Roosevelt said in his declaration of war against the Empire of Japan in response to their surprise attack on our Pacific Fleet in Pearl Harbor.

The forty-two-year-old civilian Lindbergh went to the South Pacific to work with our aviators on methods to extend the range of their aircraft. General Douglas MacArthur gave him carte blanche to fly any aircraft within his command. He flew several dozen combat missions in the Vought F4U “Corsair” with the Marines against Japanese targets on New Ireland and New Britain. Following that, he went to Hollandia and flew the Lockheed P38 “Lightning” with Army aviators against multiple targets in the Bismarck Sea environ. On one mission, he shot down a Japanese Mitsubishi Ki-5 “Sonia.” On a mission over Palau Island, it is “rumored” that he downed a Mitsubishi A6M5 Reisen “Zero.”  He continued his combat flying from Biak, New Guinea, Kwajalein, and Roni Island.

In a private ceremony in the Pentagon on 7 April 1954, Air Force Secretary Harold Talbott swore Charles Lindbergh in as a Brigadier General (President Eisenhower and the Senate had approved this commissioning).

The rest of the story is for you to read. On 27 August 1974, the 72-year-old Charles Lindbergh died from complications of lymphoma. He is buried on Maui on a cliff overlooking the Pacific on the grounds of the isolated, small Kipahulu church. I’ve visited his grave and it is a humbling and an awe-inspiring experience. Highly recommended.

One thought on “Book Review – Lindbergh”