Archive for the tag “Conspiracy Theories”

Review – Liars, Leakers, and Liberals: The Case Against the Anti-Trump Conspiracy

Pirro pens a dynamite exposé of the Deep State’s cabal to insure that the consummate liar (New York Times) and inveterate racketeer Hillary Clinton won the 2016 presidential election. With Clinton as the president, their chicanery would fade and their mischief would continue as normal. To the Deep State’s horror, the outsider Donald J. Trump topped Hillary decisively.

Donald J. Trump, this self-made billionaire, is dedicated to making “America great again” and to draining the swamp of the career politicians and entrenched bureaucrats that suffuse throughout government and whose primary task is to enrich themselves and insure their continued membership in the “good ol’ boys/gals gang.”

There’s no fiction in Pirro’s pithy essay. “Just the facts, Ma’am,” as Joe Friday was wont to say (TV show Dragnet, 1951–59). Judge Pirro was an accomplished prosecutor and a no-nonsense judge in Westchester County, New York. Accordingly, she understands full well and supports assiduously the equal application of law, and she holds as a primary tenet of the law that Madam Justice is blind. Nowadays, she is a commentator on Fox News.

On Trump’s presidential victory, the Deep State clique, now in extremis, had to engender an alternate scheme. Now they had to unseat our duly elected president to deflect scrutiny from their chicanery to rig the election—lest their malfeasance be exposed and their next ensembles be yellow jumpsuits. In concert with an eagerly accomplice media to spread their agitprop, they waged an intensive, illegal campaign focused on a Kremlin-based, gossip-filled dossier about President Trump’s failings and his extramarital, sexual proclivities. A faction consisting of Comey, Rosenstein, and others committed perjury on presentation of this nonsense dossier to the Foreign Intelligence Surveillance Court(FISA) to obtain a warrant to surveil Donald Trump and his campaign, and to justify Rosenstein’s appointment of a Special Prosecutor to investigate the president for the alleged crime of collusion with the Russians to rig the election in his favor.

Their unlawful campaign consisted of abuse of power, obstruction of justice, perjury, conspiracy, and violations of the Espionage Acts. In effect, the Deep State staged a coup d’état. It failed. And now, notwithstanding their continued futile resistance, the details of their corruption are unfolding day by day.

I’ll not go into the details of Pirro’s exposé of this Deep State conspiracy. I do not want to spoil your reading pleasure with “giveaways.” Her narrative is comprehensive, straightforward, and cogent. For those who believe in our constitution, the equal application of justice, and the rule of law, Judge Pirro’s book is a must-read.

For the aficionado of the Amelia Earhart disappearance, Campbell’s book is a must-read. He has assiduously reviewed the relevant literature regarding her last flight and, with keen ingenuity, he has compiled a compelling account that purports to unmask the enduring enigma of that flight. From the pertinent publications, he has excerpted eyewitness accounts (and second- and third-hand narratives), relevant documents, and technical details, and has assembled this substantial information into a coherent chronology.

Background: On 21 May 1937, in Oakland, California, Amelia Earhart and her navigator, Fred Noonan, started an around-the-world flight in her customized Lockheed Electra model 10E. At 1030 hours on 2 June 1939, they departed Lae, New Guinea, bound on a nonstop flight to Howland Island—2,333 nautical miles distant. They vanished. And the mystery has endured.

With deductive reasoning, Campbell concludes that Amelia Earhart landed her Lockheed Electra model 10E on Mili Atoll in the Marshall Islands. There is no credible data to explain Earhart’s decision to fly into the Marshall—a dangerous action. Under a 1920 League of Nations mandate, the Japanese controlled the Marshall Islands—the Carolines and the Marianas. Japan sealed off this vast area of the Central Pacific within the Bamboo Curtain. In secret, during the 1930s, the Imperial Japanese Navy began construction of airfields, fortifications, ports, and other military projects in preparation for the upcoming war with the Occidentals.

Members of the Japanese Navy captured Earhart and Noonan, and took them to Saipan, the Japanese Navy Headquarters in the Pacific. The pair were interrogated, and imprisoned as spies. Eventually, a Japanese officer beheaded Noonan, and Amelia Earhart was either killed or died of disease. Their bodies were buried in unmarked graves.

The rebuttal to this scenario is that there are no artifacts, no photographs, and no written documents—we have nothing tangible. This lack of hard evidence is especially curious. The Japanese were obsessively driven to keep meticulous documentation and to keep Military Headquarters in Tokyo well informed of any out-of-ordinary activities. The capture of the famous aviatrix Amelia Earhart would certainly have engendered a flurry of message traffic and entries into the diaries of senior officers. To date, no credible records exist. The Japanese were avid photographers, and many Saipan witnesses averred that they saw photographs of Earhart displayed by Japanese soldiers—yet no such photograph survives.

Notwithstanding the excellence with which Campbell has penned this exposé, I’m chagrined at his arrogant dismissal of all other scenarios that explain Amelia Earhart’s disappearance. In one instance, Campbell gives short shrift to Commander Warner K. Thompson’s 106-page report that was highly critical of Earhart’s piloting skills and decried her radio-technique ineptness. Forthrightly, Commander Thompson, captain of the USS Itasca, blames Amelia Earhart’s serial incompetence for her demise. Also, Campbell tends to reject evidence that counters his rock-solid dogma. Simply put, his singlemindedness in castigating the apostates with scandalous rhetoric and schoolboy name-calling denigrates in large measure his professional standing.

Campbell conducted only marginal original research. Rather, he has relied on secondary sources. He acknowledges missives and oral commentary from Bill Prymak, Thomas Devine, and Jim Golden. His three key publication sources were:

As the thorough author Campbell is, he includes numerous photographs; Fred Goerner’s “Island Witness List”; a declassified COMNAVMARIANAS radio message to CNO, Subject: Amelia Earhart; a Selected Bibliography including reports and other documents, magazine, newspaper, and blog articles; and an Index.

Campbell writes with deft skills and unbridled passion in this seminal work. His narrative is infectious—a page-turner par excellence. His coherent assembly of the relevant material reflects incredible organizational skills and true dedication to his conviction.

Malaysia Flight 370 One Year Ago 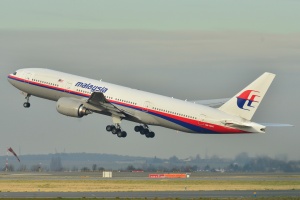 Malaysia Flight 370, a Boeing model 777-200 ER (Extended Range) disappeared 1 year and 45 days ago—one of aviation’s biggest mysteries. Notwithstanding extensive searching by temas from Malaysia, China, and Australia in the Indian Ocean off the coast of western Australia, not a trace of this aircraft has been found. In a Press Release, dated 16 April 2015, Malaysian Transport Minister Mister Liow Tiong said that these three countries are “…committed to the search.” Should the aircraft not be found by the first of May, the searches will expand the target area by 23,000 square miles. In total, therefore, the search area will be expanded to 95 percent of the flight path of the plane.

China’s transport minister, Yang Chuantang said that China might contribute more vessels and other assets in the search. (Most of the passengers were Chinese.)

In January, the Malaysian authorities formally declared that the plane’s disappearance was an accident, and that all those on board are presumed dead.

The mystery surrounding this calamity is why the aeroplane was so far off it intended course. We need to know the “why,” “who,” and “where.” Is it in fact in the Indian Ocean off the west coast of Australia?

Many relatives of the passengers posit a host of conspiracy theories including one that the aeroplane was highjacked and landed somewhere safely. I wonder.