Archive for the tag “University of Moscow”

Catherine the Great of Russia, (1729 to 1796). Reigned from 9 July 1762 to 17 November 1796. Catherine became Czarina on the death of her husband, Czar Peter III.  Her reign is a study in contrast. Legend has it that she organized a plot to have some of her sycophants murder Peter, and that her sexual proclivities were legend.  On the other hand, the actual historical record is replete with accomplishments. 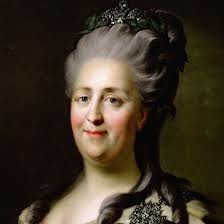 In 1757, Voltaire called her an “enlightened despot.” For example, Catherine established the Free Economic Society in 1765 to encourage the modernization of agriculture and industry. She promoted trade and the development of under-populated regions by inviting foreign settlers, and she founded new towns. Catherine patronized the arts, letters, and education. She permitted the establishment of private printing presses and relaxed censorship rules. Under her guidance, the University of Moscow and the Academy of Sciences became internationally recognized centers of learning; she also increased the number of state and private schools. Finally, Catherine greatly expanded the Russian empire–prizes from two successful wars with Turkey. After her death, the Russian Orthodox Church proclaimed her a saint.

In my historical novel St. Catherine’s Crown  Catherine the Great’s diadem is the raison d’être that threads the narrative and is the Alfred Hitchcock’s MacGuffin.  Follow the adventures and trials of those Whites that want to keep the crown from the Bolsheviks, and those Reds that want to recover and exploit it.  Follow from afar, I might suggest.  The narrative is fraught with hidden perils.